Merged dimensions create a merged object from the shared objects within the multiple queries. This object allows for "communication" between the two queries so that the objects can be used in the same table. The best fields to use for this are identifiers: Participant Site ID, Enterprise Site ID, etc. The data in these fields must match exactly in order to be merged properly.
For example: using a name field as a merged dimension is not a good idea as two or more participants could share a name.

Common examples for creating a merged dimension include:

First, you will want to identify the objects that the two queries share in common. Here are some examples.

The process of putting objects from two or more queries in the same table has two major steps:

In order to create a merged dimension in ETO Results, follow these steps: 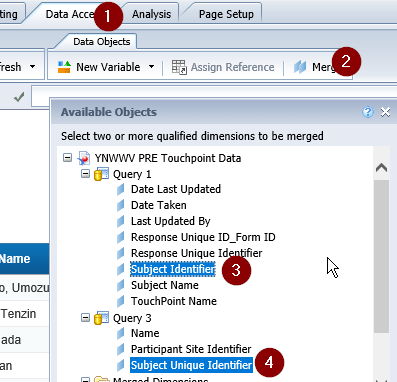 3. Select objects from individual queries while holding the CTRL key.
4. Click OK when complete.
5. The merged dimension will have now been created and will be visible in the Merged Dimensions folder in the Available Objects window.

Best practice tip: Change the name by right clicking and selecting Edit Properties. This will help you easily identify the correct object when creating details or when using the merged object in a variable. 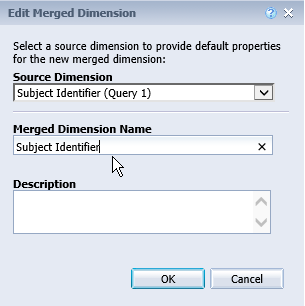 Adding an Object to an Existing Merge

If you want to add a new object to an existing Merged Dimension, follow these steps: 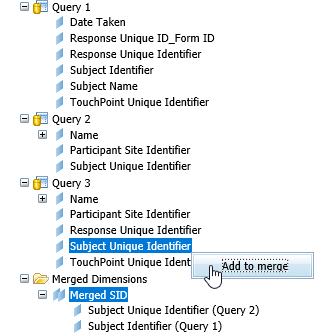 Details often provide a bridge between two data points with commonalities. When we merge Participant Site ID or Subject ID, we can make details for demographic information or unique TouchPoint answers.

Details are generally one-to-one ratios in that only one Demographic Value would be associated to each Participant Site ID. 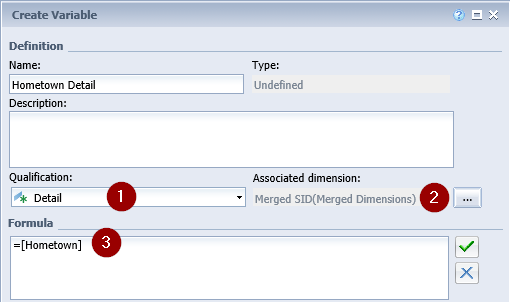 In this example, we are creating a detail using a custom demographic called 'Hometown'. This is linked on our Merged Subject ID. This will allow us to use this demographic with objects from another query.

OTHER TIPS FOR MERGED DIMENSIONS