Written by Kristen Farnsworth
Updated over a week ago

Up until the addition of ETO Results to ETO Software, the vast majority of the standardized reports were built using Crystal Reports.  ETO Results Reports are built using a tool called Web Intelligence or WebI. Social Solutions has developed several standardized reports using WebI.  These reports can be found in the top section of reports listed at the top of the View Reports screen (accessed below Reports on the Navigation Bar).  Some of these reports, such as Box Score and Participant List are very similar to existing Standard Reports built with Crystal.  Each of them is pictured and described in the Help manual.

The benefit of these reports being built with WebI is that customers who have ETO Results are able to customize the reports based on their specifications.  The first step in customizing one of these reports is to launch it.

Save As Standard WebI Reports to Customize 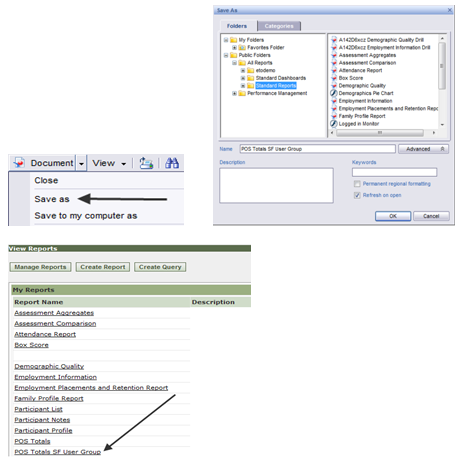 To start the customization process, select Save as from the Document menu in the upper left of the report.

Determine whether you want the report to just appear for you, which would mean it should be placed in Favorites Folder, or for other users, too, which is the Public Standard Reports folder.

Be sure to rename the report.  If you forget this step, there will be 2 reports with the exact same name and it will be difficult to differentiate them on the View Reports page.

It’s very important to check the Refresh on open checkbox.  If this box is not checked, any user who runs the report will see the same data that was contained in the report last time it was run.

So, for example, if an Enterprise Manager runs a report and pulls back data across the Enterprise, and the next user to run the same report is a staff level user, they will see data that they should not.

Once you’ve made the appropriate changes, click the OK button and close the report.  Click View Reports on the Navigation Bar to refresh the page.  Click on the name of the new version of the report to launch it.

Once the report generates, click the Edit link in the upper right.

This is the Edit Report view. 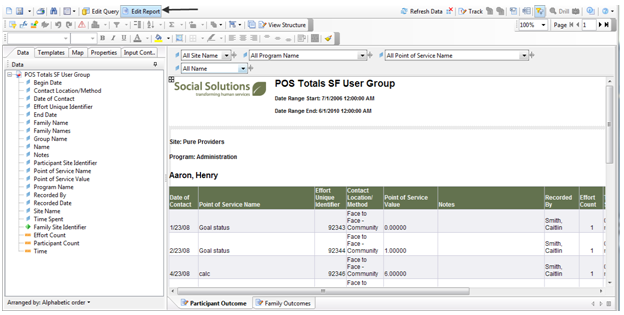 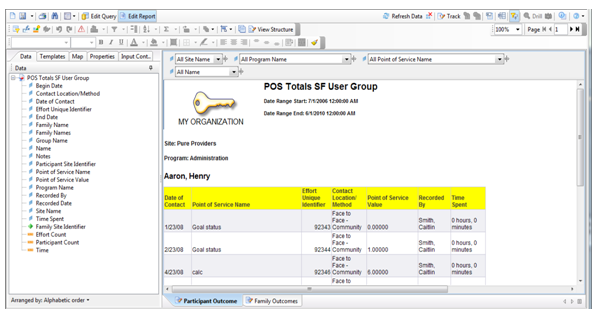 A few formatting changes have been made.  Column headers have a different color font and fill and a few columns have been removed from the report altogether.  Also, a new image has replaced the Social Solutions logo in the upper left of the report.

Editing options will be covered in more detail a bit later.

Be sure to click the disk icon in the upper left corner of the report to save changes!

Some users may find it helpful to reference which Results Objects and Query Filters were included in a report.  Also, additional result objects and filters can be added to customized versions of standardized reports.